Somehow through that which is grace I was lucky enough to encounter, however peripherally, an author, a healer, a teacher, a self-described soul self-care coach, a lovely being named Kate Bartolotta. She passed away in April. I imagine if all the hearts she touched joined hands we could reach far enough to hold Mama Earth as lovingly as She held Kate for far too short a time. What I learned from Kate is to always finish something I began writing. Here’s a post I started a while ago. Sending gratitude for her lessons and hopes that Divine Mother hold her children, her family and all that loved her close. 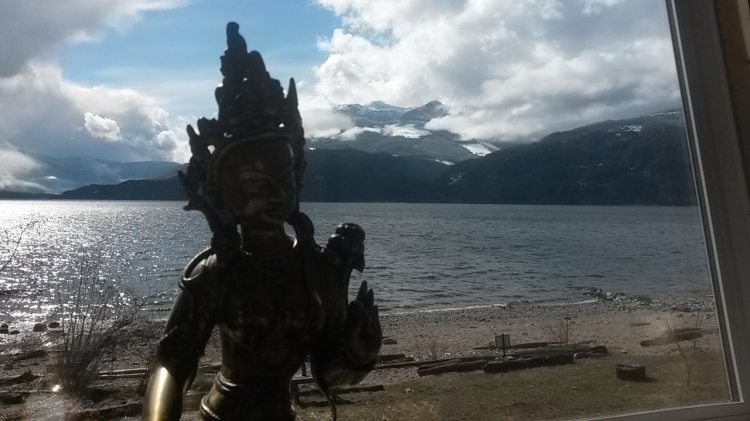 The Timeline of an Ashram Visit

So you’re in Western Canada for a short time as you continent-hop over this precious Earth and planning to stop at Yasodhara. Here’s what you can expect from a short visit if you’ve lived there for three consecutive years in your 20s. Plus that weird year later when you were incredibly depressed.

Day One: The Arrival

You’ll arrive while daylight still permeates through the trees and buildings. You’ll take your time walking into Mandala House, breathing in that scent of pine and oxygen and Light. Everyone will be thrilled to see you and you them. There’ll be a lot of open arms and smiling faces. You’ll see old friends you weren’t expecting and others you’d been looking forward to catching up with. This is generally an easy-going time.

With a magnetism you’ll never fully understand, you’ll visit the Temple first, then maybe chant in a prayer room and spend some time at the beach. Depending on the length of your stay you’ll unpack your suitcase to various degrees.

As you wander the grounds you’ll get feelings of familiarity and change all at once. You’ll know each tree and shrub. You’ll have waves of memories wash over you of every season that has gone before that matches the season of the current visit. Yet you’ll also be different. Your concerns will have changed. The immediate life situation you’ve left behind will be different. You’ll hold these gently as you re-enter this precious place. You’ll breathe in. You’ll breathe out.

There will be a few more enthusiastic hellos from people who’d been in town or sick in their rooms the previous day, but generally people won’t be ecstatic to see you. They saw you yesterday. You’ve given them the 50 word spiel, edited and refined more and more with every telling about what you’re up to lately and what you’re doing next. You’re settling into the routine and your familiar face fits in. Haven’t been back in six months? More? It doesn’t matter, in some ways it’s already as if you never left.

You help with dishes and quickly adjust to the slight changes in the kitchen. Plastic containers go there now. Pyrex lids go in the drawer beside the sink.

There will be times, in those snippets of a moment between organized routine, that you’ll wonder just what to do with yourself. You’ll feel a little lost — should you go to the beach? Play guitar in the mat room? You only have half-an-hour. Oh gee, 25 minutes actually. You’ll relax into it. You’ll choose the right thing.

You’ll get these waves of yearning for a feeling that you’re in the midst of feeling. You’ll be in satsang or walking down the gravel path. A sudden peace will seem to enter your very being and you’ll want it closer than that. Closer than right next to every cell. And you’ll realize that it’s impossible to get closer because it’s not next to each cell. It simply is each cell. You’ll keep walking.

You’ll feel guilty for not waking up for morning practice. It might be chanting in the Temple or morning hatha. You’ll compare the expectations you had about yourself during this visit with the reality of sleeping until breakfast. You’ll forgive yourself. You’ll be gentle, kind and accepting.

Dim light filtering in through the trees will catch you off guard. In a moment of heightened awareness, you’ll feel your entire body relax, your mental acuity focused vividly on the reality around you. You’ll experience moments of blissful presence. Your whole body will vibrate in gratitude. It will be as if the veil is shimmering, showing you a glimpse of something beyond this known reality.

You’ll be riding those waves of bliss from the previous days but a nagging feeling will have started. Maybe you’ve had a medium-gauge negative interaction with someone. Or you made it to a hatha class and a mass of tension in your hip released as you concurrently realized another layer of self-judgement you hold. Another place in which you aren’t what you imagine yourself to be.

It’s okay, this is normal. If the whole thing were comfortable then there wouldn’t be much use of an Ashram, would there? No one said personal growth was easy.

You’ll feel soft and permeable. You’ll enjoy visiting deeper with friends and yesterday’s realizations will have invigorated you somehow. Isn’t is funny how an experience can do that? You’ll think it’s negative at first and then later, once your mind has exhausted itself running possibilities, you’ll see the gift in it. Part of the gift will be in that very process. How we can move beyond our limitations and shift into new perspectives.

You’ll start to think about packing your suitcase. About getting a ride to the ferry or how you’ll get into town. Concerns in the world will creep in to your awareness. You’ll notice them. You’ll ask them to wait, you’re not ready to think about them yet. You want to go deeper, stay longer. You want to chant in the prayer room with the sunlight reflecting off the lake, blaring in so bright you can’t see Swami Radha in the picture frame on the altar. All you’ll see is your own face, reflecting back in the glass. And you’ll find such reassurance in that, like you always do.

Day Six: The Leaving Even Though Part of You Never Really Leaves

The morning will come gently and swift. It will rise up pink over the Selkirks and replicate itself perfectly against the smooth glass of Kootenay Lake. You’ll wonder then if actually you’ll live two days. There’ll be the one in which you can stay here and keep doing the only thing that’s ever really made any sense to you: getting to know yourself, serving selflessly and offering back what seems like nothing in comparison to all that you’ve been given. And that other day, the one where you leave because you know that’s what you need to do right now. And you know that you’ll be back.

You’ll feel grateful that you know what home is.