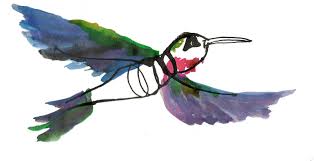 What if a bird came

and landed right on my outstretched palm.

What if it just flew through the door

resting gently onto me.

There is more time between the existence of the Tyrannosaurus

than the Tyrannosaurus and us.

What makes dinosaurs so interesting?

Is it the necessity for imagination?

This bird would be small and colourful

It would have appeared here,

in this unlikely place,

just as I have,

by coming through the door.

Exquisitely fragile, each feather would be perfectly

It would preen itself

And the curve of its neck would reveal

a lightness to its down

contrasted with the bold-coloured strength of its wing-tips.

despite its unnatural surroundings.

Soon it will be a memory,

dug up and conjectured upon.