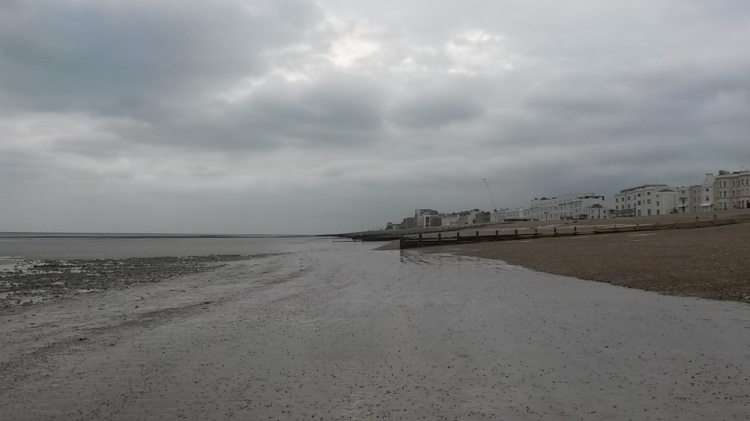 I’ll never forget the way the tide came in on the Maitai River. Small fanned out rivulets fighting salty wet. Then one rushing wave pushing back strong. Too strong for the river. It whelped in retreat, obliterated by the ocean’s force. I had no idea the tide could do that — moon tugging at water in regular cycles. Hold an entire river hostage.

I was walking along the shore today at low-tide. First, on the promenade. Monotonous cement. Lanes to keep me separate from the bikes. I ran out of cement and veered right, south toward the water. The endless stones broke and I edged to the sand: rippled. Uneven. Random.

I wanted to get further though, closer to the water. Where the seagulls stewed in gentle waves to their knees. Do birds have knees?

All around me minuscule springs flowed out of the slope toward the ocean. That’s what we do. That part of us inside that is compelled, by a gravity-like force, to lose ourselves and merge into consciousness. A drop becomes again the sea. Rippled sand became patches of water, flowing. It wove around green, algeaed rocks stubbornly jutting above the water line. Suddenly more water than sand.

The best way forward became obvious. Head down, momentum kept: stride along the rocks. No time to think, just do. Action outweighing the logic of scanning ahead, finding out the best route, the best way to keep above the three inches of water.

Metaphor hitting me like a dart. Have faith the next step will appear, don’t worry about three steps ahead, just keep moving forward.

At an appointment in Brighton to get a National Insurance number. The bland civil servant filled out a form with my particulars. “Ever gone by any other names?”

Oh. This question. “Yes.” I feel resentment rise that the state be so involved in the details of my life. Certain aspects of the past revived in official ways, never allowed to settle.

I’m reminded of the courthouse one August. Mark already engaged again, his eyes moist as I walk up, packet of papers in my hand to make official what we’ve known for years. We hadn’t even seen each other for over 18 months. Life and circumstance kept us from filing for divorce right away. We wanted to do it jointly instead of involving lawyers more than necessary. No “serving” one another. Only, we needed to be in the same province, which rarely happened then. Such annoyance at the process. The high-heeled clerks painstakingly reviewing the forms. Why couldn’t I will it away? Simply decide to be divorced and then it be so. What is this monolithic entity that can decree the category I fall into, tell me what box to check on forms. I resented it.

“The name you were born with?”

He continues to fill out the form, turns the page, smooths the binding to lay the packet flat.

“What was your husband’s name?”

What? Why does that matter? I enunciate the four syllables.

Crikey! When was that?

“And date of divorce?”

Now that’s a date I remember clearly. The last day of the Mayan calendar.

We were told it would take up to six weeks. October rolls by and nothing. November. Finally, Mark calls the courthouse. They’ve lost the paperwork. It was processed in Ottawa, but on the way back to Alberta it got misfiled. They found it, thank goodness, and push it back on track. We were told that once we each get the official letter the divorce is final exactly one month later — just in case anyone changes their mind. I wait. The letter arrived in late November.

Return address: The Court of Queen’s Bench of Alberta.

I rip open the envelope, greedy for closure. To let this part of my life rest.

It’s all there, exactly what I wanted to see. The official certificate of divorce. Signed and dated for November 21, 2012.

I’m startled by the timing of it all. A mislaid form offering me a new beginning at the end of an ancient measure of time. Exactly one month later, December 21, is the last day of the Mayan calendar.

Yet here I am, nearly six years later (and it feels like so many more), still drudging up the past with all these forms. I can’t help but think how my youthful blip wouldn’t have been detected if I hadn’t changed my name. How Mark remains free from this drudging.

We finish the process. The officer hands me back my passport and I leave the grey building, full of its empty greetings from wandering security guards.

Walking home from the beach I realize the irony of my married name. Fast. My last name used to be Fast. I’m obsessed with the illusion of time. It follows me everywhere.

I’m crossing the bridge over the train tracks. I see the overgrown lilac bushes. Their wild glory wafting delicious scent my direction. My favourite.

Why does time so often arise as a theme in my life?

I came to England with this visa now because I was running out of time. I was aging out of eligibility. With a fresh new passport I’d been impatiently waiting for I applied a week shy of my 31st birthday. And then flew to Hawaii. Living in England was a thing I was planning on doing soon. But was it ever something I actually wanted?

Sometimes I feel like the ocean tides, pulled compulsively by the moon. Subject to her whims as I flow around this globe. Marking time. Can’t my life be like incoming tide on the Maitai River? One decisive wave. Obliterating all else. It’s clear-cut and focused. Nothing in the way of its goal.

I’m trying to figure out what I want.